Visiting address: “Yamuna Eri” is located along the Kachcheri Nallur Road and turn to Chemmani Road.

A pond or tank is an area filled with water. The tank "Yamuna Eri" is one of the remaining ruins of the Nallur Rajadhani in Jaffna. It was built during the reign of King Cinkai Ariyan Cekaracacekaran (I) (reigned 1215-1240). Yamuna Eri is situated close to "Manthiri Manai" (Minister’s Abode) at "Cankili Thoppu" and close to the place where the ancient Nallur Kandaswamy Temple stood in the past.

“Yamuna Eri” pond was built with walls on three sides in the shape of the Tamil letter "ப". The rim of the pond is built with limestone blocks and bricks. There are stairs leading down to the water pond is located at the southern end. In the centre of the "ப" a raised stone platform stands, covered with green grass and there was a beautiful garden in the past. According to I. D. M. Wijebandara (Yapanaye Aithihasika Urumaya), the outer part of the pond is about 70 feet long, 65 feet wide and 15 feet deep. The raised stone platform presenting in the central of the pond is about 55 feet in length and 30 feet in width.

There were many secret passages and underground tunnels built by Arya Cakravartti, Kings of Jaffna, for defensive purposes. There is a secret underground tunnel connects to “Manthiri Manai”. The River Yamuna also known as Jamuna is one of the most important and sacred rivers of the Hindus in North India. The Sacred water was brought in poles from the Yamuna River and mixed it with the water in the pond; hence it came to be called "Yamuna Eri". This water pond having the shape "ப" is very beautiful and it is one of the important landmarks of the Nallur Rajadhani in Jaffna.

Most of the Hindu temples have a sacred pond (Theertha Kulam / Theertha Keni), built nearby the temple complex. The Nallur Kandaswamy Temple originally existed in the South-East section of the Nallur Rajadhani. The present location of the Nallur Kandaswamy Temple is called “Kurukkal Valavu” and it exists in the North-West section of Nallur. During the period of Arya Cakravartti, Kings of Jaffna, Yamuna Eri sacred pond (Theertha Kulam / Theertha Keni) was built for the Nallur Kandaswamy Temple. According to V. N. Giritharan (Nallur Rajadhani: City Layout), there is no need to bring the scared water from Yamuna Ganga if it was used for bathing purposes. Due to its beauty, later during the colonial period it must have been used for bathing purposes by the colonial officials.

“Yamuna Eri” and other Historical Ruins in Nallur, Jaffna, are protected and maintained by the Department of Archaeology. It has been published in the PART I. (GENERAL) – CEYLON GOVERNMENT GAZETTE – No. 9,886 – FRIDAY, JULY 16, 1948.

1. The pond known as Jamnari and situated in the land called Sankili-Thoppu at Nallur within the administrative limits of the Jaffna Urban Council. 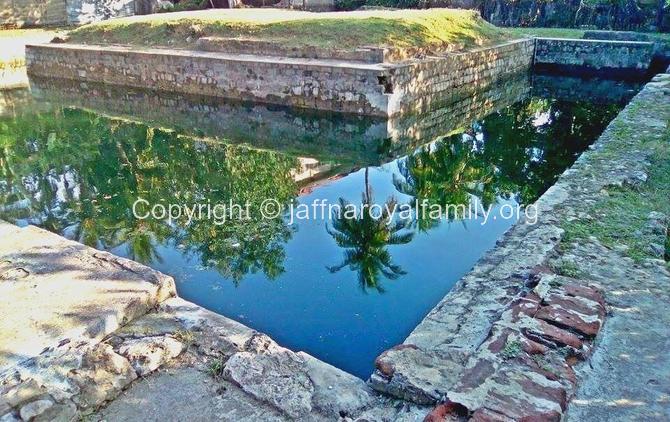 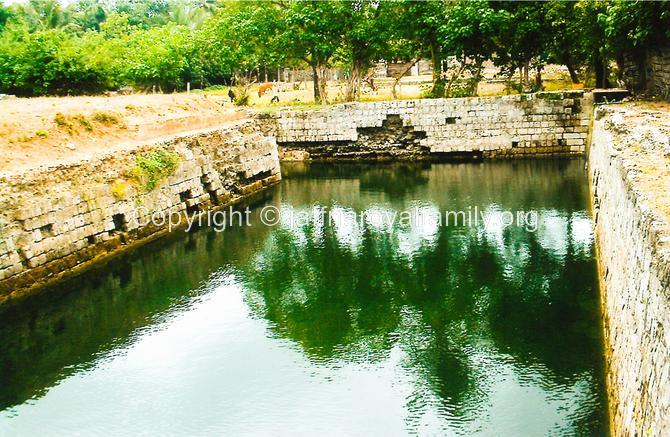 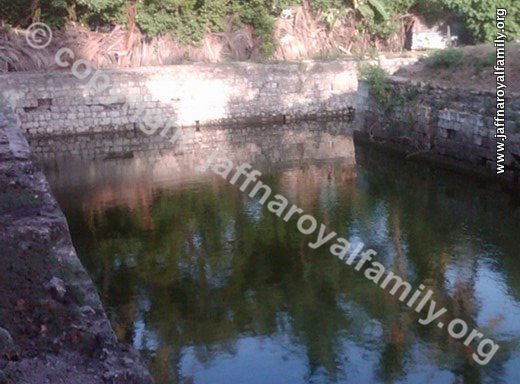 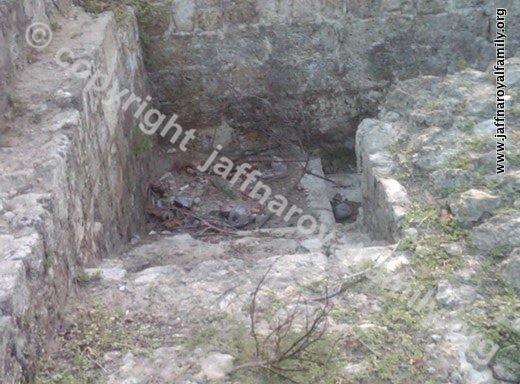