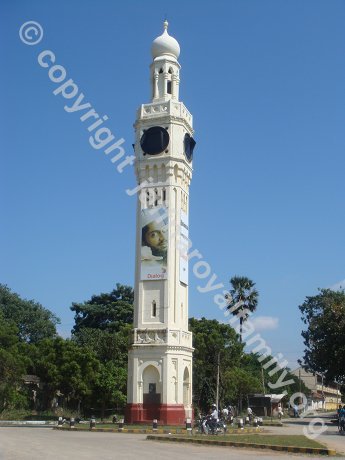 THE CLOCK TOWER IN JAFFNA

The Clock Tower (Yalpanam Manikkuttuk Kopuram) in the city of Jaffna is about 130 years old, an important landmark in Jaffna’s colonial history during the British period.

In 1875, HRH Albert Edward, Prince of Wales (later Edward VII), son of Queen Victoria visited Sri Lanka. Later by the Reception Committee a decision was made to build a Clock tower in Jaffna to commemorate the visit of the Prince of Wales. The Clock tower was designed by Mr. J. G. Smither, the Government architect and the clock was gifted by Sir James Robert Longden.

During the civil was the Clock tower was badly damaged and in 1998 when HRH Prince Charles visited Sri Lanka, the Prince of Wales offered British assistance in restoring the Clock tower.