THE LEGEND OF KONESWARAM TEMPLE IN TRINCOMALEE 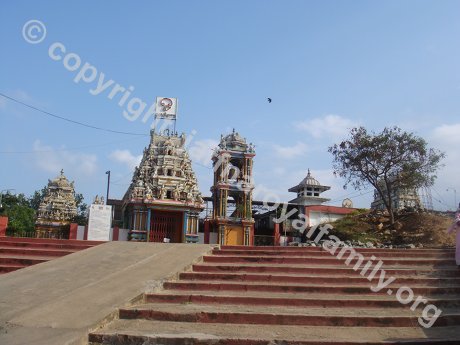 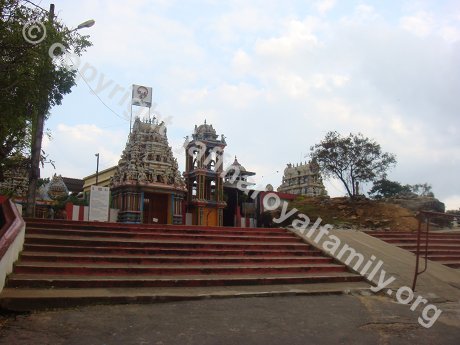 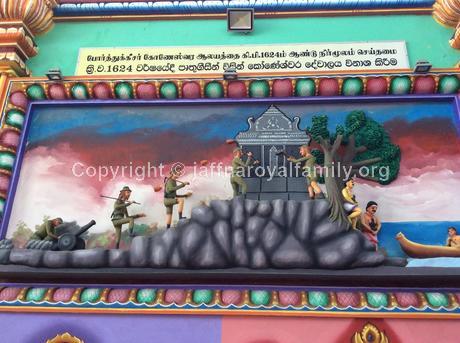 THE LEGEND OF SWAMI ROCK IN TRINCOMALEE 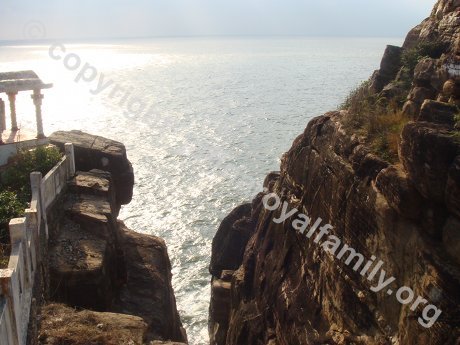 The ancient Koneswaram Temple also historically known as the Thirukonamalai Konesar Kovil, the Temple of the Thousand Pillars. The temple is situated on top of a rock facing the sea. The name of the port city of Trincomalee is derived from the Tamil word “Thiru-kona-malai” meaning “Lord of the Sacred Hill”. The shrine is dedicated to Lord Shiva in the form Konesar. It is believed that the ancient Koneswaram temple has been there for more then 2500 years and it was renovated by Maharaja Kulakkottan of Chola Dynasty. The Koneswaram Temple was one of the richest temples in South East Asia and it had in its possession precious stones, priceless pearls, large amounts of gold and silk.

According to Prof. S. Pathmanathan (The Kingdom of Jaffna), two recently discovered inscriptions from Manankeni and Nilaveli in the Trincomalee district show that the temple of Koneswaram was patronized by the Colas. The inscription of the Cola prince called Ilankesvaratevar from Manankeni mentions Maccakesvaram which was another name for Koneswaram.

In the Trincomalee district, as in Batticaloa, small principalities dominated by Tamil chieftains called Vanniyar had emerged in the thirteenth century. Some of the events connected with their development have been chronicled in the Konesar Kalvettu (A Tamil stone inscription) which records the traditions and legends relating to the famous Saivite temple at Trincomlee Koneswaram. The origins and development of the chieftaincies in the North-eastern littoral may be viewed as the culmination of the process of the growth of Tamil settlements spread over a long period of time.

The Tamil settlement at the port of Trincomalee was one of the oldest settlements in the island and the Koneswaram temple had been maintained to satisfy the religious needs of this settlement.

Vararamatevan, the son of Manuniti Kanta Colan, and his son Kulakkottan came to Trincomalee with their retinue and army after hearing of the greatness of the sanctified site at Trincomalee. Later, Kulakkotton decided that the services at the shrine of Konesar should be revived and elaborated with help from the Cola country. He brought craftsmen including smiths from the royal mints (Akkacalaiyar) and constructed a Saivite temple surrounded with several lofty gopuras, created the sacred springs and endowed the temple with fields and tanks which he had reclaimed and made elaborate arrangements for conducting religious services. He settled at Trincomalee six families selected from the best of Colas and brought from Marunkur and granted them lands to be held in hereditary succession. He deposited treasures in the temple and ordained that the expenses incurred and the income obtained daily should be recorded by the tanattar who also had to ensure that the ceremony of alatti and other services were duly performed.

Moreover, he settled at Trincomalee twenty-one families of Varippattar who had been brought from the Tamil country. They were to perform such services as gathering flowers, making garlands, cleaning and preserving silk garments used to decorate the images, carrying banners and umbrellas on festive occasions, singing to rhythm when the dancing girls perform their dances, lighting lamps, distributing sandal powder, pounding rice and polishing the floor. People of the tanam and Varippattu received rice fields at Pallaveli as remuneration for their services.

Kulakkottan brought Taniyunnappupilan from Madurai raised him to the rank of a Vannipam and placed the administration of the town of Trincomalee under his charge. Furthermore, he settled a chief of a Karalar family from Trinnevelly at Kattukkulam and made him the ruler of the division of Kattukkulamparru. This chief was assigned lands in Nilaveli and endowed with the insignia of a Vannipam. Kulakkottan ordained that the accounts of the income for the Konesar temple should be in the custody of the Vanniyanar of Kattukkulamparru and his successors. The inhabitants of Kattukkulam were required to serve the temple. The people of Nilaveli were to conduct the festivals. Kulakkottan also proclaimed that the revenue in the form of Atai, Ayam, tirvai (Atai ayam and tirvai denote tax on land, income from customs and tolls and grain tax respectively) and the dues from the sea port should belong to temple. On the orders of Kulakkottan, Nilacotaiyan and his armies diverted the water of the Mahaveli and constructed a huge reservoir. Land to the sowing extent of 2,700 avanam was converted into fields and granted to the temple.

The value of the foregoing account as a source of historical information would depend on the historicity of Kulakkottan and the veracity of the details concerning his activates. It cannot be said of Kulakkottan, as it can of Manuniti Kanta Colan and of Vararamatevan that he is a legendary figure. The Taksinakailaca puranam states that he Kulakkottan had the name Colakankan. As there were many princes and dignitaries who had the name Colaganga (n) in Kalinga, South India and Sri Lanka, Kulakkottan Colakankan many be regarded as a historical personality. That he had close connections with Koneswaram and Trincomalee is suggested by persistent local traditions which credit him with the reconstruction of that temple. Kulakkottan’s activates in Trincomalee are dealt with in considerable detail in the Taksinakailaca puranam, the Tirukonacalapuranam and others works. Besides, the sixteenth century Tamil inscription at Fort Frederick also asserts that the main structures at Koneswaram were constructed by Kulakkottan. He could not have lived before the eleventh century because it was only after the rise of the Imperial Colas that the name or title Cola Kankan came into use. There had been princes or dignitaries who had the name Codaganga in the island during the twelfth and thirteenth centuries. A prince called Codaganga Kumara was at the cout of Polonnaruwa during the reign of Gajabahu I (1132-1153). Another Condaganga was the nephew of Nissankamalla who seized power at Polonnaruwa after having put to death Vikramabahu. Yet another Codaganga is known of from a fragmentary Sanskrit inscription discovered at Fort Fredrick, Trincomalee.

This inscription states that Codaganga came to the island in Saka 1245 (A. D. 1223). The inscription was inscribed on a door jamb found among a set of images, and it may be assumed that the missing portion of the epigraph recorded certain benefactions of Codaganga to the temple of Konecar the remains of which were used as bulding materials for the fort constructed by the Portuguese in 1624. As there is some evidence to prove that the Codaganga who had come to the island in A. D. 1223 had some connections with Konesvaram, he may provisionally be identified as Kulakkottan Colakankan who, as claimed by the local Tamil traditions, rebuilt Konesvaram and reorganized its services.

The Empire Jata Varma Sundara Pandyan (II) defeated the King of Lanka and he planted the Pandya flag with the "Double Carp Fish" and engraved the "Double Carp Fish" royal insignia of the Pandyan Dynasty at Konamalai. Trincomalee is the site of the "Sacred Hill of the Three Temples". Situated on the eastern seaboard, the Chola and Pandyan Kings maintained the traditions of royal patronage. The inscriptions at the entrance of Fort Frederick with the insignia of the double carp symbolism of the Pandyan Kings are eloquent of the Pandyan connections ascribed to the thirteenth century.

The Arya Cakravartti, Kings of Jaffna paid homage at Koneswaram Temple under its sovereignty, they offered gifts of gold and silver. During the reign of Jeyavira Cinkai Ariyan Cekaracacekaran (1380-1410), had the traditional history of the temple compiled as a chronicle in verse, entitled “Dakshina Kailaya Puranam”. That precious work is accepted today as the Sthala Puranam of Koneswaram Temple. In the Sixth Century, the Saivite Saint Thirugnana Sambandar, in his pilgrimage to Shiva Sthalams, made his obeisance before Konainathar and offered a garland "Pathikam" of precious Thevaram verses, in praise of the Lord who has taken his abode at Kona-ma-malai. This is the earliest reference to the temple, which in point of time goes back to a far distant epoch. The Koneswaram Temple was well supported by the local residents.

The Sthala Puranam describes the location at that time as “Kona-ma-malai”, around which the ocean waves swept pearls, gold, precious gemstones and shells from the depth of ocean and heaped them along the shore. Like all Arya Cakravartti, Kings of Jaffna he helped the development of Saivism and took special interest in the Koneswaram Temple. The Dakshina Kailaya Puranam speaks of him as ‘one born for the establishment of Shaivism.

The Koneswaram temple (Temple of Thousand Pillars) were despoiled and was razed to the ground by the Portuguese soldiers led by General Don Constantino de Sa de Noronha. The valuables of the Koneswaram temple such as precious stones, priceless pearls and gold which were collected over thousand years were plundered. After destroying the Hindu temple complex the stones and its carved pillars from the foundation were removed in order to construct the Fort in Trincomalee. The Portuguese built a triangular fortress on the spot where the temple stood, which was named the Fort of Triquillimale.

THE RECONSTRUCTION OF THE NEW TEMPLE IN THE TWENTIETH CENTURY

The ruins of the Koneswaram temple and the ancient statues made of gold and copper were unearthed in 1950. Some of the statues of deities were saved by the devotees and for many generations the Tamil people have preserved their Hindu heritage.

The destroyed Koneswaram temple was rebuilt in 1963. The Lingam and the ancient statues unearthed were installed in the new temple. The newly built Koneswaram Temple ceremony, the Maha Kumbhabhishekam took place on 3 April 1963.