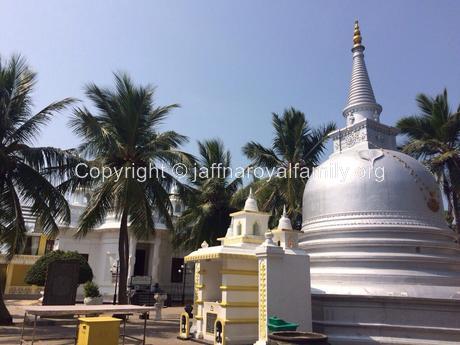 Nagadeepa Rajamaha Viharaya is an ancient Buddhist temple which is located on the island of Nainativu. It is one of the sixteen most sacred places for Buddhists in Sri Lanka. The Rajayathana Stupa was constructed nearly 2700 years ago by two Naga Kings, Mahodara and Chulodara.

According to legend the Lord Gautama Buddha touched the ground here on his second visit to the island, five year after enlightenment, to resolve a conflict between the two Naga Kings, Mahodara and Chulodara, regarding the possession of a gem studded throne. The Naga King Mahodara was reigning at Nagadeepa, his nephew Chulodara at Kannavaddhamana Mountain (Kandamadanam near Rameswaram and his Uncle, Maniakkhika was the King of Kalayani (Kelaniya).

Lord Gautama Buddha during his visit preached to them a sermon on reconciliation and urged the two Naga kings to forget hating each other and to live in peace. The two Naga Kings Mahodara and Chulodara and their followers after hearing the sermon preached by the Lord Buddha and decided to end their enmity.

After the two Naga Kings made peace between them, the gem studded throne was offered to the Lord Gautama Buddha, as a token of their gratitude, but he retuned it back to the Naga Kings. It was later enshrined in the Rajayathana Stupa and it became a pilgrimage destination.