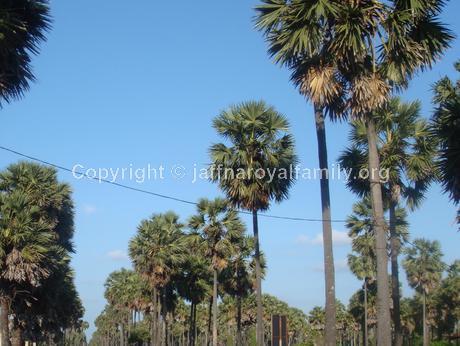 The Palmyra tree also known as “Borassus Flabellifer” of the palm family and symbolizes the Jaffna peninsula. The palmyra tree traditionally has been the most important tree and it is highly respected. Also every part of the tree can be used, because it has valuable resource for the people in the Northern Peninsula.

During the Dutch colonial period the Palmyra tree was selected as the device for the Dutch Coat of Arms of the Commandant of Jaffna Patnam.

The Palmae Arecaceae is known as Panai or Panam in Tamil and Thal Gaha in Sinhala. The Palmyra tree grows mostly in Northern and Eastern part of the island. It is also found in India, Bangladesh, Malaysia, Burma and other topical countries.

The palmyra palm is a large tree grows up to 30 meters high and trunk may have circumference of 1.5 meters at the base. There are 25 to 40 fresh leaves, they are leathery, gray green, fan-shaped and two to three meters in length. The stem of the tree is black in colour and looks like cylinders. The young palmyra trees grow slowly in the beginning but then grow faster with age.

When the fruit is very young and the top of the fruit is cut off, you find usually three sockets inside and these contain he kernel which is soft as jelly and translucent like ice and is accompanied by a watery sweetish liquid. The jelly like substance is called in Tamil as “Nongu”, it is commonly known by the British as “Ice Apple” and they are very delicious. The bunch of palm fruit is used in many ways in food. The palmyra fruit is a very good remedy for heat rashes and heat boils, as it is very cooling.

The palmyra sap can be obtained from the young inflorescence either male or female ones. The sap is a sweet clear watery liquid and several products can be made by processing the sap, jaggery, sugar candy, toddy, arrack and vinegar.