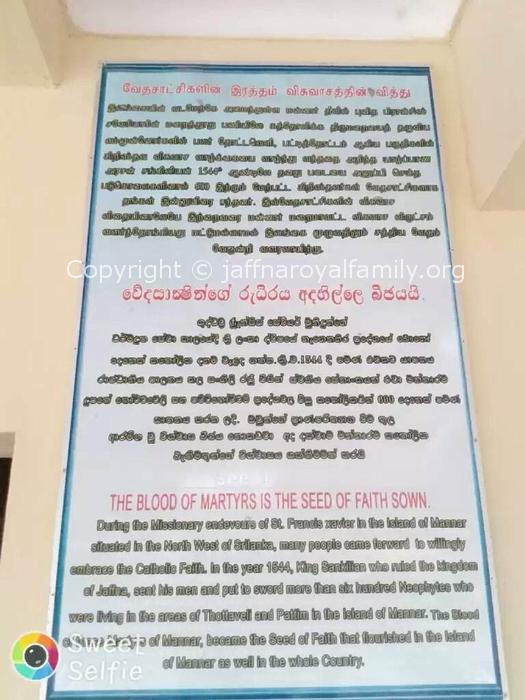 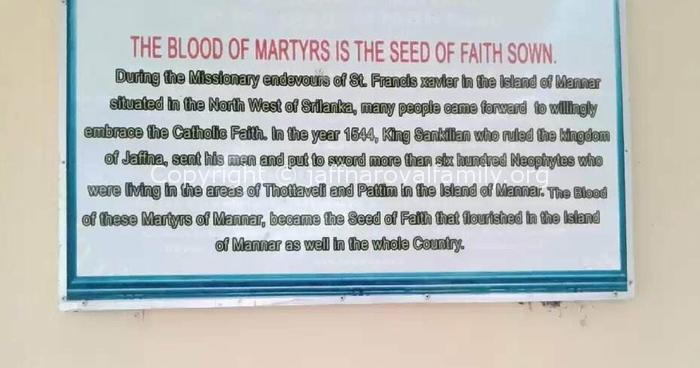 The Kingdom of Jaffna had not been disturbed by the Portuguese until Christian converts in the Island of Mannar. The Island of Mannar was dependant on the Crown of Jaffna. According to C. S. Navaratnam (Tamils and Ceylon), by 1543 many of the Paravas in the Coasts of Tuticorin had embraced Christianity, and St. Francis Xavier was carrying on a vigorous evangelistic work among them. It is said that the year 1544 has been the peak year of conversions in the East. According to John H. Martyn, in 1544, when the Roman Catholic Religion was first introduced into the island by missionaries send by St. Francis Xavier, the Kadayar were the first to embrace it, which raised a great persecution against them. The Portuguese, therefore, began to cast anxious eyes upon the sparsely populated arrears of North Ceylon to settle their new converts. They also wanted to get the control of the pearl-fishing in these coasts.

It was believed that because the Christian Faith was introduced by the Portuguese, the converts to Christianity would support the Government. Therefore Cankili Raja (I) Cekaracacekaran personally led an army of 5000 soldiers to Mannar and published an Edict. Unless the converts renounce their new Faith and re-embrace the Hindu religion, they would be severely punished. But the Christians of Mannar stood firmly in their Faith. In December 1544 some escaped to the mainland, the Priest Francis Xavier, Commanding Officer Ilavarasan Ilansinghan, about 600 to 700 of the new converts, entire families of the soldiers and sailors who had become Christians were put to the sword at Pattim in Mannar, which was later called by the Portuguese Illa dos Martyres-the Island of Martyrs. Cankili Raja (I) did not spare even small children. Cankili Raja (I) Cekaracacekaran issued a proclamation that no priest of any other religion than the Hindu should approach the shores of the Island of Mannar. The Generals and Army Officers of Cankili Raja (I) Cekaracacekaran’s were buried at the Pattim Grave with military honours. The Pattim according to the earliest Portuguese documents is “Half a league from the Fort of Mannar”. In 1945, Rev. Dr. P. A. J. B. Antoninus and his team used ancient maps for excavation and succeeded in locating Pattim site. It is known to local residents as Paddi Taravai, located at the second mile post, half mile west of Fort-Talaimannar road.